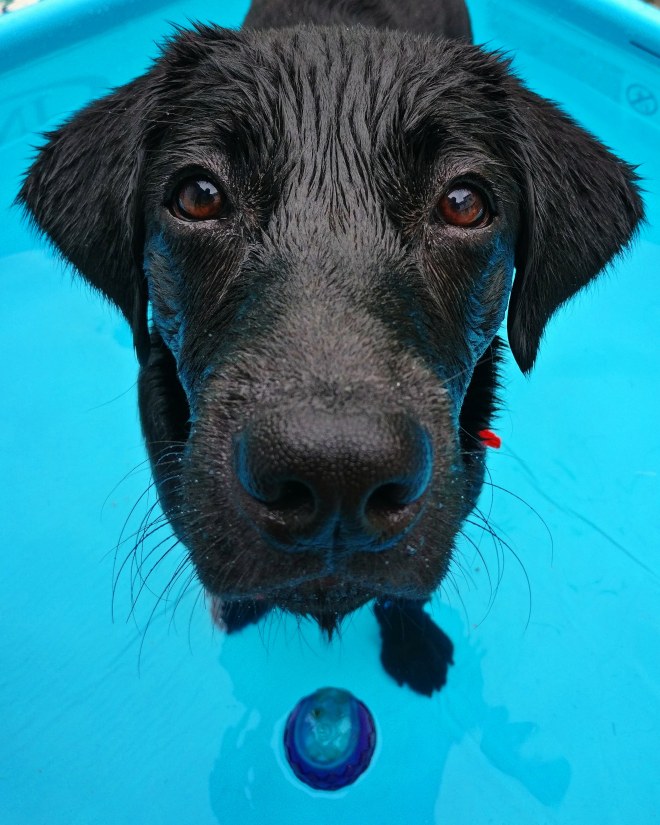 Eio turned six- months- old this month and I thought I’d give you guys an update on him and at the same time tell you guys what I’ve learnt ever since he walked into our lives. It’s been four months since he arrived and honestly, I feel like he’s been with us since forever. It’s hard for me to picture a time when he wasn’t around. That’s how much of an impact he has made on our lives. My parents love him to the extent that they sometimes treat him like their grandson.
Elio’s a good boy most of the time but he does have his bouts of mischief. The one thing that fascinates him the most are socks. He just absolutely loves them. For some strange reason, he loves stealing them, but he never shreds them into pieces. The same thing goes for shoes; he steals them, makes sure that he shows it to somebody before running away. I guess he just loves playing keep away when he’s bored and wants our attention. He does dig up holes in our backyard on rare occasions and comes home covered in mud from head to toe with a grin on his face. We’re lucky it doesn’t happen that often.
Like most Labradors, he LOVES water. But surprisingly he’s not a fan of baths. He won’t protest or run away while he’s being washed but getting him into his bathing area is a challenge. He loves his morning walks so much that he carries his own leash every morning before we leave the premise of our house. Oh and he’s a good football player. He loves playing that game as well as playing fetch. I just found another thing he loves to do, that is sing. Yes, you heard me right, my dog can apparently sing. But he does that only when I’m playing the piano and never to pop music. I discovered this little quirk of his when I was learning The Office theme song as a birthday gift for my roommate. Maybe it was the piano, or maybe it was the song, I have no idea. But the little guy sang his heart out.
I spend a lot of time with Elio because he’s always by my side. Even when I’m busy writing, or reading or attending online classes he’s right next to me. Before I go to sleep, he’s the last thing I see for the day and he’s the first thing I see when I wake up the next morning. I thought that as a puppy parent, I’d be the one always teaching Elio and not vice versa. But that’s not the case. I’ve learnt quite a few things from him that I would love to share with all of you.
1) Patience and Consistency deliver results: I’m not the most patient person on the planet because I like things done immediately. I cannot wait especially when it comes to important matters. But ever since we got Elio, I realised I had to be. Here was this little puppy who didn’t know anything about the world. And me expecting him to know not to pee in the house, not to puppy bite, not to eat something he wasn’t supposed to, was illogical. I had to teach him every single day and I had to be extremely patient. His puppy biting really tested my patience to the point that I thought he’d never grow out of it. I was close to giving up and letting him do whatever he wanted. But I’m glad I didn’t because it finally stopped. So I’m happy to say that my patience and consistency paid off in the end.

2) Finding Happiness in Small Things: Like most people, I often dream about the future, always working towards it, spending most of my time chasing after it, that I entirely forget about the present. I would entertain my uncertainties about my future more than caring about what was actually happening around me that very moment. With social media forcing people to believe this concept that you’ll never be happy unless you’re rich, good looking, famous and very successful, it deviated my mind to dark places. I know that what I see on social media is merely a façade that people wear, but sometimes I can’t help but think there’s some truth to it. Then I look at Elio who has no clue about the concept of social media, influencers, and celebrities and is still living his best life. The things that make him happy are: when he’s out for his morning walk when he’s bird watching, when he finds a new stick, when he plays with water. Just being included in a room where the whole family is gathered makes him really happy. I wasn’t doing well mentally and it wasn’t until I saw Elio enjoying the most mundane things in life that I thought I’d give it a try. And it works. I’m happier now living in the moment than spending my time thinking about the future.

4) Unconditional Love: Let’s face it; we humans do not really know the true meaning of unconditional love because if we did, divorces, break ups, broken families would not exist. Of course, like everything else, this has an exception too. I never knew what unconditional love meant until I met Elio. When I have a bad or stressful day, I do tend to ignore him and sometimes out of frustration, I do yell at him even when he’s done something insignificantly wrong. Since he’s ALWAYS with me, sometimes I do want to spend time without having to keep one eye on him. To do that, I lock myself in my room and I know for a fact that he hates it. As flawed as I am, he still looks at me like I’m the best thing to ever happen to him and I can safely tell you that no one will ever admire you the way your dog does. His personality has affected me. Even though Elio has his shortcomings and does drive me crazy sometimes, he’s still one of the best things that’s ever happened to me. Loving him has taught me the true meaning of what unconditional love is.

These are the four lessons that’s I’ve learnt in these four months since Elio came home and I’m pretty sure there is so much more that I can learn from him. And when I do, I will make a part two to this list. Until then, take care and stay safe.

2 thoughts on “Lessons I Learnt From My Pup.”